The Broncos played this game in old uniforms, thus the yellow and burgundy.

The boys had great seats and a perfect view of the winning kick. 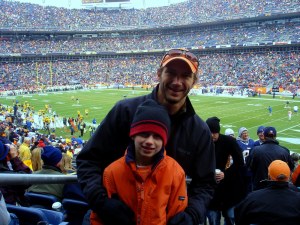 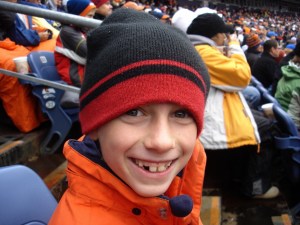 Scott and Sam went to the Broncos game yesterday. Samuel has been wanting to see a game at Mile High for some time now. Since we are getting close to his birthday, Scott and I discussed it and gave Sam the choice of presents or tickets to a Broncos game. After about 2 seconds, he chose the game. Yesterday’s game was the closest home game to his birthday which is on the 26th. The night before the game, we gave him a new Broncos t-shirt and told him about the game. Thrilled would be an understatement 🙂
Despite the cold and fog, they had a blast and saw an awesome game. The Broncos played the favored Patriots and beat them (much like the MSU v CMU game) in overtime.
Happy (early) Birthday Sam!

One thought on “Football”