Yesterday, Sam celebrated his 9th birthday with lots of family and friends at our house.  19 kids and 10 adults to be exact 🙂  He wanted a potions party with science experiments so I took the idea and ran with it.  We added a few Harry Potter details like a sorting hat and a Golden Snitch cake.

The kids started out  at the beverage station where they could make their own potion to drink.  We had lime soda, root beer, pop rocks, gummy worms and black ice cubes.

At the kitchen counter, Scott led the kids through an experiment with milk and vinegar.  When the vinegar is added to the boiling milk it makes a piece of natural plastic. The kids got to decide what color they wanted and then took their hardened plastic home.

At this table, Grandma Peggy led the kids in an experiment making water into a solid with polymers.  Polymers are just like the substance in a baby diaper. 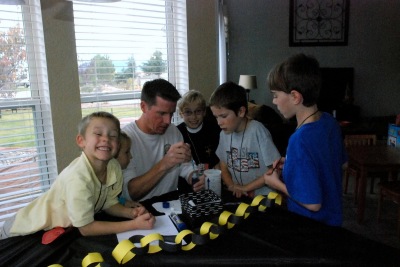 We used a homemade sorting hat to form four groups of kids.  The four groups moved between the experiments together.  We had the Ravenclappers, Grifyndoodles, Slytheronis and Hufflemuffins. 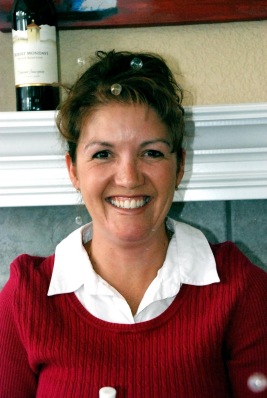 The kids had tons of fun blowing the touchable bubbles.  They seemed to really like to stick to Aunt Stacie’s hair 🙂

Uncle Mick led this experiment with vinegar and baking soda.  The kids had fun with the bubbles and making a balloon inflate. 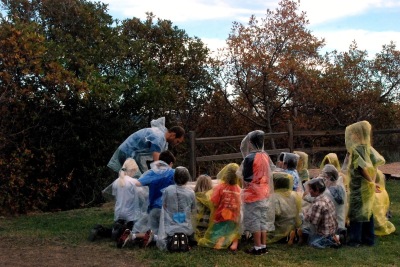 After a quick game of soccer, we handed out ponchos to all the kids and got started on our next experiment.

We added Mentos to Diet Coke and it exploded high into the air.  Thank goodness for the ponchos.  Some of the kids got a bit wet.

We tried this experiment a few more times but we weren’t as successful as the first time around.

Time to cut into the Golden Snitch cake. Before assembling the cake, I filled the inside with jelly beans.  Some of the kids thought it was cool.  Others not so much:)
Thank you to all the adults who came and helped out.  They were mostly unaware that they would be leading experiments, taking pictures, handing out cake and ice-cream and getting bubbles stuck in their hair.
Happy Birthday to Sam!  We love you so much!

One thought on “Sam’s Potions Party”