Paige has a serious fear. She isn’t afraid of much except spiky balls. No, this isn’t going to be an x-rated post and they are not some medieval torture devise, although the way she screams when she sees one would make you think it might be.
She is afraid of these…… 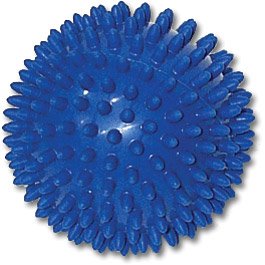 and these really terrify her, extra spiky…..

Okay, so today I rounded up the kids and we headed off to the library to read and check out some books we had on hold. I went in first figuring all my ducklings were trailing behind me but when I looked back, Paige was standing off to the side of the front door, facing the wall, eyes tightly shut and her arms crossed. When I asked her what was wrong, all she could squeak out was “Spiky Ball”. Sure enough, on the counter in the Children’s Library were 5 colorful spiky balls lined up, prizes for those kids who could complete the summer reading program. I tried to get her to walk past, ignore them, anything so that we could spend more than a nanosecond in the library. Everything I suggested just made her scream louder…and we are talking blood curdling here. I was looking for an afternoon event to fill up the time and this was not going to be it. Sam swiftly retrieved our books on hold and we were out of the library in 5 minutes.

@#$% spiky balls. Of course, I would never say anything like that in front of my kids.

I got this brilliant plan to have a spiky ball intervention. Maybe if she could see one and touch one in the comfort of her home, she would overcome her fear. So, I bought one. A pink one with a piggy face, kinda cute. She LOVES anything pink. That is what I am thinking anyway. After Mason, Alice and Sam were tucked into bed, we sat down with Paige and tried to introduce her to our newest toy. Of course, she was already privy to the intervention and we were not going to trick her into touching or even coming close to that ball. After a few minutes (and I won’t lie, a few bribes) we gave up, put away the spiky ball and well, gave up.

I guess we won’t be going back to the library this summer.

One thought on “Spiky Ball Intervention”