Running~
Friday night I went to Silverthorne with two of my friends for a real mom’s night out. We ran in the 10K race at Run the Rockies on Saturday morning. The race followed the bike path from Copper Mountain to Frisco. The weather and scenery could not have been better! Thanks Kristin and Kim for a really nice couple days away. We even got to eat two meals without cutting food into tiny pieces…and no one spilled their milk. So relaxing…Just like dining along a Paris sidewalk 🙂
Scott ran this morning with his friend Bill. He left the house at 5ish (that would be a.m. folks) and didn’t arrive back until noon. They ran around the Air Force Academy and Rampart Range, 25 miles in all. Well, they are training for a century run after all!
VBS~
Samuel, Alice and Paige attended vacation bible school this past week. They always enjoy their time at VBS and we wouldn’t miss it. This year the theme was Camp E.D.G.E. At the end of the week they performed some songs that they had learned and we enjoyed an awesome picnic afterwards. Today at church, they sang some the their songs for the congregation. Sam really wanted to wear the blazer and tie that his cousin Jacob sent him. He insisted on keeping the tie on the outside of his jacket because it looked so cool. 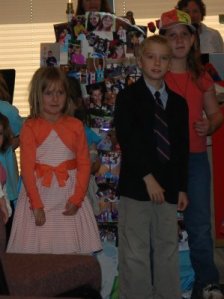 Pool Time~
We are still hanging out at the pool every morning, what with swim team practice and lessons. Sam had his first official swim meet on Saturday. Super Dad, Scott, took all the kids while I was enjoying my mommy time in Summit County. He swam well and truly there is nothing cuter than Sam in a skin tight suit, swim cap and camo goggles.
Today, we headed to the pool as soon as we saw a break in the clouds. Scott got to swim in the big pool with the three older kiddos while I hung out with Mason in the little pool. That’s right, Mason finally got his day in the pool. He started out sitting in the shallowest part and graduated to walking along the edge checking out bug and places where the water had been splashed from the pool. It was wonderful to see him WALKING in the water and bearing his own weight. So far, he has not liked getting up on his little feet because he isn’t used the sensation and his muscles are not formed fully for walking. I think that the water gave him just enough buoyancy that it didn’t bother him as much as out of the water. He was even a trooper when the brace had to go back on. 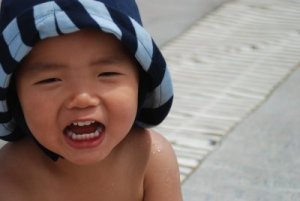 Are you tired yet of scrolling through endless shots of my darling cherubs at the pool? Only two and a half more months to go of my babies in bathing wear.

Life here is always on the crazy side but we wouldn’t have it any other way. Looking forward to a warmer week and playing at the pool. We might even meander down to the library. Here are some fun shots of the kids (and big kids) playing in the yard after dinner. 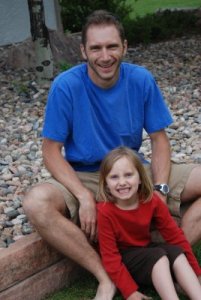 I hope you all have a fun, safe week!
Jennifer